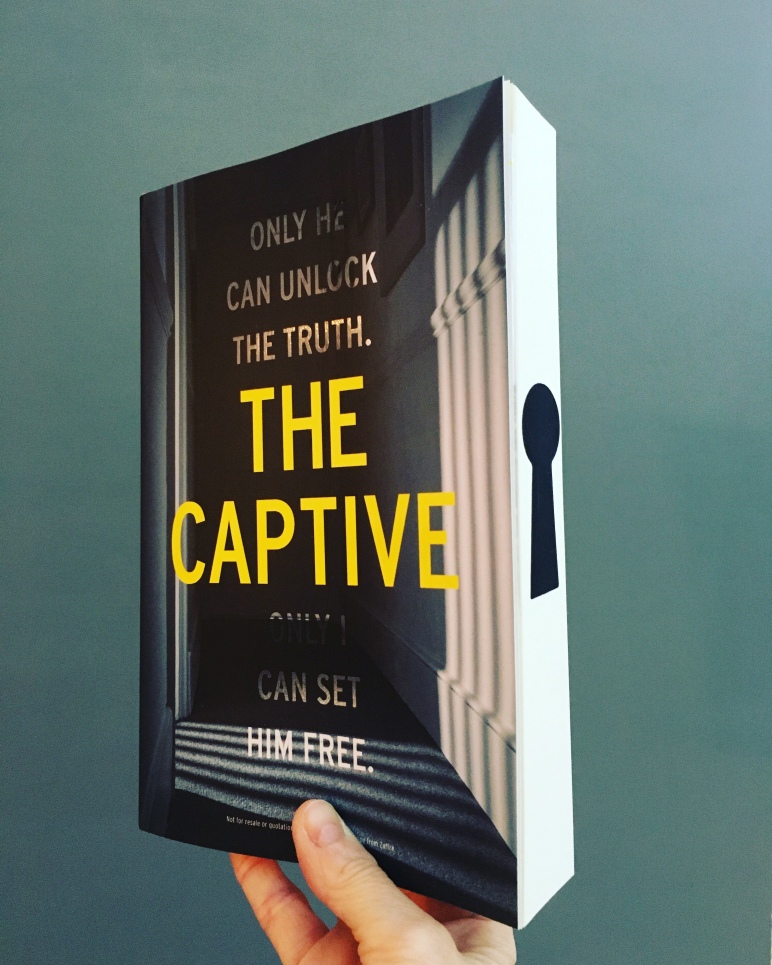 Hannah knows the cage intimately. Small, the size of a shopping centre parking space. A bed, a basin, a table and chair. A hatch and metal drawer through which to exchange food and other items.

Then there’s him. Always there on the edges of her vision, no matter how hard she tries to block him out.

Every day, the same thoughts run through Hannah’s mind:

The Captive is the second of this author’s books I have read, having previously enjoyed A Dangerous Kind. Here’s a link to my review The Dangerous Kind by Deborah O’Connor .

Set in London in the near future, our main character Hannah is grieving the loss of her husband John. John, who was a police officer, was murdered some months before, while returning home from the pub. Overwhelming evidence has meant 28 year old Jem has been found guilty and given a 25 year sentence for murder. However, it is not a prison he will be sent to but a cage, the size of a parking space, which has been constructed inside Hannah’s kitchen. The Government have replaced the old system of overcrowded, expensive and ineffective prisons with the Domestic Prison Service, a system based around restorative justice, where a convicted criminal is housed in the home of the person or person’s family they have committed a crime against, with the view that by seeing these poeple everyday and seeing their pain and the consequences of their actions, they will be less likely to reoffend.

However, this system also has a major effect on the ‘host’, having literally been assigned the same sentence as the criminal and having to face this person on a daily basis, cooking meals for them and organising their time around the Domestic Liasion Officer visits, has many not pressing charges in the first place.

Hannah is already having second thoughts before Jem is moved in and has applied for an excemption. But on those first few days/weeks of Jem’s arrival he has explained the events of the night of John’s death and Hannah is now sure that the wrong person has been charged and sets out on an investigation of her own.

With side characters of friend Aisling and John’s partner Rupert and old boss Mickey the reader soon learns of worrying events that were occurring in the lead up to John’s death.

I found this an engaging read with great characters that are both vivid and realistic. I soon warmed to Hannah as her personality comes through from the very beginning. I loved the fact that she was a baker of cakes which in turn meant that she had to spend a considerable part of her day in the kitchen and therefore unable to avoid Jem. It was a great way to watch the host and the caged getting to know each other. I also enjoyed reading the story of Jem which added another thread to the mystery neatly twisting it into the story of John’s. I found the idea of the new prison system a clever and original idea. The thought of having the person who has committed a crime against you, caged and in your home for years, sounds horrendous and this was brilliantly portrayed by the mention of the lady living up the road in a tent. I did however think it sounded more of a cost cutting decision rather than an improvement to encourage reoffending (am I surprised?) as so many would therefore not press charges to avoid becoming a host that many people must be running around free to reoffend. However I found I could easily put this thought to one side as the pace and build up of suspense was very well written and kept me interested throughout. I also thought the use of Hannah’s job, the lady next door and Jem’s past gave the book a very real feel and kept it believable and grounded.

Many thanks to Clare Kelly of Zaffre Books for my proof copy.