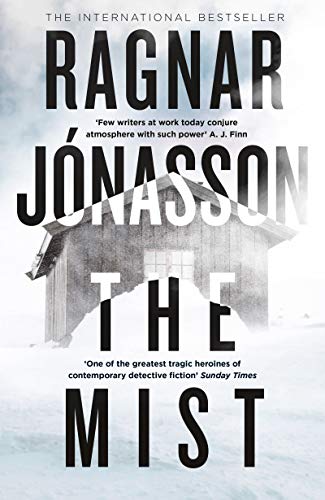 Just before Christmas a winter blizzard sweeps across Iceland. In their remote farmhouse, Erla and Einar are hunkering down for the night – when there’s a knock at the door.

It’s a stranger, desperate for shelter. They take him in – but they’ll wish they hadn’t. Because this man is not who he says he is. And, when the power cuts out, it’s the beginning of a terrifying ordeal . . .

Later, Detective Hulda Hermannsdottir – recovering from a family tragedy – is called to an isolated farmhouse. Bodies await her and a haunting mystery . . .

The Mist is the third and final book in the wonderfully evocative, Nordic noir, Hidden Iceland series.  The trilogy started with our main character Detective Inspector Hulda Hermannsdottir about to retire and working on what could be her last case.  The books then travel back in time to the 1990’s and further back again to the 1980’s.  A great device, allowing the reader to slowly understand some of Hulda’s personality and the troubles that she carries on her shoulders.

I’ve read another book recently that borrows the Kierkegaard quote,

‘Life can only be understood backwards; but it must be lived forwards’.

I thought this was very appropriate here too!

This book is set in a very remote location in the Christmas of 1987.  Snow has cut off a farm house, even from a walk to the local village and the weather and dark, dark days are superbly described.  A stranger knocks on the door, claiming he is lost in the storm and the couple who live at the farm offer him shelter, the done thing, but the wife soon becomes suspicious.

We also follow the backstory to Hulda’s home life and ‘meet’ her husband, daughter and mother, and read as Hulda becomes more and more impatient and concerned with their behaviour.  With work taking up a lot of her time, she is called in to a case of a discovery at a remote farmhouse……….. thus, as in book 2, the two threads of the story come together.

I found this quite a slow moving and subtle read, but at the same time still full of the author’s dark, chilling and remote setting, atmosphere and events.  I thought it gave a quieter conclusion to the series which for me felt fitting, with something more shocking ending the first book and this book confirming answers to questions that I had built up over reading the other 2 books.

I enjoyed this series very much and found reading them backwards was a clever idea.  They can be read as standalone and I guess in the other direction. But I would recommend you read them as the author intended.  If you like Nordic Noir you should definitely give these a try.

The Mist was released this week and is available to buy now!

Thank you to the publisher and to NetGalley for an advanced copy of this book.

7 thoughts on “BOOK REVIEW – THE MIST – By RAGNAR JÓNASSON”