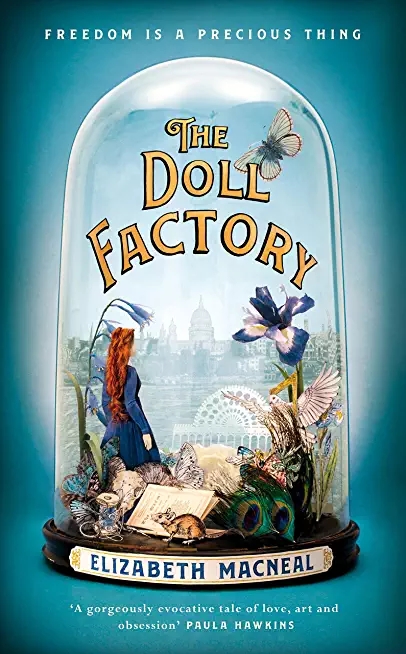 London. 1850. The greatest spectacle the city has ever seen is being built in Hyde Park, and among the crowd watching two people meet. For Iris, an aspiring artist, it is the encounter of a moment – forgotten seconds later, but for Silas, a collector entranced by the strange and beautiful, that meeting marks a new beginning.

When Iris is asked to model for pre-Raphaelite artist Louis Frost, she agrees on the condition that he will also teach her to paint. Suddenly her world begins to expand, to become a place of art and love.

But Silas has only thought of one thing since their meeting, and his obsession is darkening . . .

Set in London at the time of The Great Exhibition Elizabeth Mcneal’s debut novel blurs fiction with the founding members of The Pre-Raphaelite Brotherhood.

A very atmospheric read, it describes 1850’s London superbly. The two opposing sides of London life are very well reflected. The squalor and dire living conditions of the poor and the energy and opportunities of the rich.  The characters jump off the page with their love of things such as art, curiosities and taxidermy and their day to day goings on.

We meet Iris, who along with her sister Rose, works in a doll shop under the supervision of mean Mrs Salter.  Instead of painting doll’s faces day after day Iris dreams of becoming a true artist. To paint!  She meets the Pre-Raphaelite artist Louis Frost who asks her to become his model, in exchange for painting lessons, Iris agrees.  Leaving behind her old life she enters a world she has dreamed of and quickly becomes part of the lives at Grower Street.  The story unfolds with Iris agonising over leaving her sister behind as her life changes for the better and we meet some wonderful characters along the way.

The decadent artists, Albie, the wonderfully portrayed, lovable young boy, taking jobs here and there to find money for him and his sister and the decidedly sinister Silas, living in his equally dark and sinister world.  After a brief introduction to Iris, which she quickly forgets, Silas becomes obsessed and this wonderfully researched book turns into a frighteningly, chilling, pacy thriller.

If you’ve read and enjoyed books such as The Mermaid and Mrs Hancock, The Miniaturist and The Taxidermist Daughter you will like this.

The Doll Factory is published May 2nd by Picador.  It has been chosen as a BBCRadio 2 book club choice.

Thank you to the publisher and Camilla Elworthy for my advance readers copy.

7 thoughts on “The Doll Factory by Elizabeth Macneal”